The emigration von Wittgenstein in general (in German)

It is estimated that as many as 12,500 people left Wittgenstein between 1719-1819. In this paper, Mr. Imhof discusses the reasons for emigration at this time, the types of people who left, and some of the major destinations. These included Australia, Eastern Europe, Russia, the Baltic states, and the Americas (South, Central and North). Southern- , Central- and North America.

The details are here …

„Causes for Emigration From the German Counties of Wittgenstein", 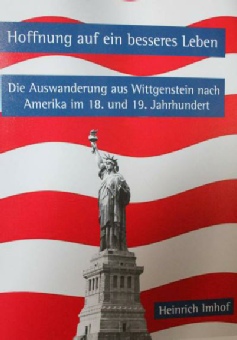 Hope for a better life (in German)

The emigration from Wittgenstein to

America in the 18th and 19th century

Price 38,- Euro (plus shipping if necessary)

Extract from the table of contents